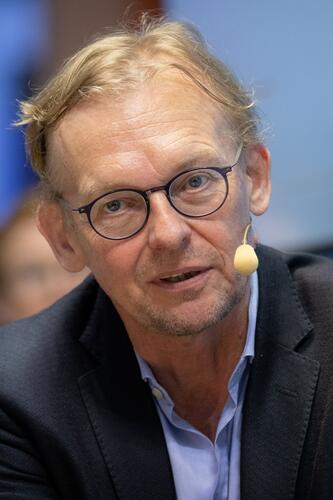 The German Department welcomes Dieter Thomä (Professor of Philosophy at the University of St. Gallen) as Max Kade Visiting Professor for the Fall 2021 term. Dieter will be teaching two courses for the German Department, which you can read about below.

Dieter Thomä is a philosopher specializing in social philosophy, political philosophy, aesthetics, and phenomenology. He is particularly interested in the question of order and disorder in political, social and aesthetic settings. His book on Troublemakers discusses Hobbes, Rousseau, Diderot, Friedrich Schiller, Richard Wagner, Alexis de Tocqueville, Victor Hugo, Sigmund Freud, and Carl Schmitt, among others.

GMAN 307: Greed and Its Discontents: From Aristotle to the Present

Money matters, whether we like it or not. Besides being an economic means, it plays a pervasive role in the lives of individuals and the social fabric at large―a role scrutinized by writers, philosophers, and cultural theorists. By opening up a vast horizon of possibilities, money represents power and desire. It is regarded as an enabler of freedom by some, and as a source of alienation by others. Money is said to be detrimental to social cooperation, as it fuels the “frenzy to achieve distinction” (Jean-Jacques Rousseau). When it comes to greed and its discontents, issues of status, recognition, and contempt come into play. Money, which has been called an “abstract” form of happiness (Arthur Schopenhauer), permeates the debates on the intricate relation between well-being, welfare, and wealth. On a macro level, the standings of different social spheres, including the economy, politics, and the realm of intimate relationships, depend on the question of whether “everything is for sale” or not (Debra Satz). In this course, we explore the meaning of money by tracing the arc from Aristotle to the present.

Georg Büchner’s (1813-1837) is a work across times and places. In Danton’s Death he reenacts the French Revolution, in the pamphlet Hessian Messenger he calls for revolution in German lands. Büchner’s other, simultaneous, revolution is one of language and literature. In the narrative Lenz and the theater play Woyzeck, Büchner turns the Romanticism of his own time upside down and the two works resurface only ca. 1900 as trail blazers of social naturalism and modernist (postdramatic) theater. Celan, in the Meridian, gives an idiosyncratic account of Büchner’s travel across times and places. The course contextualizes the close reading of Büchner’s work with materials from the French Revolution, early socialists, Marx; French, German, British Romanticism; prose and theater ca. 1900 when Büchner is rediscovered; Celan.