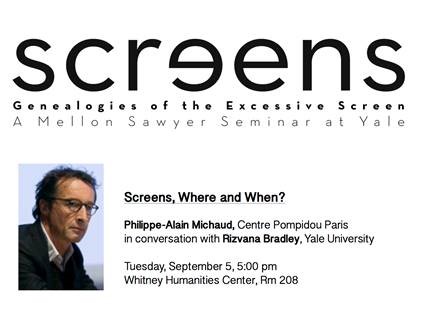 Philippe-Alain Michaud is an art historian and film curator at the Centre Pompidou in Paris. He is the author of Aby Warburg and the Image in Motion (2004), which extends Aby Warburg’s theories of iconology into the domain of new technology categories of image-making technology, such as the Daguerreotype, the chronophotography of Étienne-Jules Marey, early cinema, and the dances of Loie Fuller. He demonstrates that Warburg’s notion of the “re-activation” draws heavily from notions of cinematic projection, motion, and montage. At the Centre Pompidou he has curated numerous exhibitions on the relationship between cinema and contemporary art, such as Hans Richter: A Journey Through A Century.

Rizvana Bradley is an Assistant Professor of Film Studies and African American Studies at Yale. She received her PhD in Literature from Duke University in 2013, and her B.A. (Highest Honors) from Williams College, where she studied English and Political Theory. She was a Helena Rubinstein Critical Studies Fellow at the Whitney Museum of American Art Independent Study Program in New York from 2012-2013. Before coming to Yale, Bradley was as an Assistant Professor at Emory University, and a Visiting Research Fellow in the Department of the History of Art at the University College London. Born in Kenya, and raised in the U.K., Germany, Poland, Tanzania, and the U.S., Bradley’s research and teaching focus on the study of film and media at the intersections of contemporary art and performance (with a particular interest in the development of the moving image in relation to cinema). Her scholarly approach to artistic practices in the fields of African-American cultural production, as well as the wider black diaspora expands and develops frameworks for thinking across these contexts, specifically in relation to global and transnational artistic and cinematic practices.

For more information about Genealogies of the Excessive Screen, visit the seminar’s website.